Tyler Harrison had a dream.

He was given an egg and a letter snugged in a parchment envelope whilst a lady in black and purple flames float in the air. She told him something about the impending rise of the Dark Lord of Magic and consuming the blood of the gryphon to attain immortality.

Tyler had lived his whole life believing that he’s such a sore loser and an untrustworthy person. Countless times that he had witnessed himself fail and proved nothing.

Little did he know that he was about to face his fate. After he learnt that he has something to do and prove, he still hesitated and doubted. But now he must come to terms with his father who abandoned him, face terrible monsters, brawl with horrendous witches and wizards, and come face to face with the Olympians.

Will Tyler choose to take matters into his own hands and fight for the people who believe in him? Or will his fear of uncovering the dark truth and secrets about the two greatest wizards get the best of him?

Tyler’s journey in the world of Greek gods, witchcraft and magic begins. 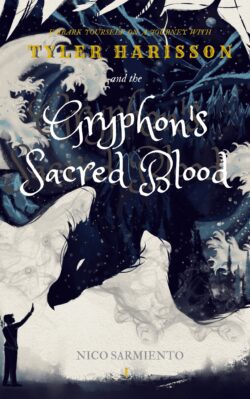 Tyler Harrison Chronicles | Nico Sarmiento | Novel | Paperback
₱650.00
We use cookies to ensure that we give you the best experience on our website. If you continue to use this site we will assume that you are happy with it.AcceptPrivacy Policy