Sunsets are Sonnets by Alvin B. Cruz | Paperback | Poetry

Alvin B. Cruz’ debut poetry collection Sunsets Are Sonnets & Other Poems puts together his earlier poems and his new and unpublished works, speaking to us with a quiet but compelling voice that resonates with our own experience of love, loss, and longing.

This illustrated anthology starts with free verse poems, most of which were published in Philippine Graphic Magazine. These poems reflect the poet’s depth and complexity of a gamut of emotions. At one end of that spectrum lies a sense of loss and emptiness, as in the poems “No Words,” “Memory,” and “How to Strike a Conversation with a Stranger on a Lonely Evening.” While at the other extreme one hears a voice that celebrates solitary yet fleeting moments of sudden awakening and bliss, as can be gleaned from the poems “White Flower, White Cloud,” “Crossing,” and “Sunsets Are Sonnets.”  In between, the poet ruminates on the meaning of his own place in the grand scheme of things.

Aside from free verse, this poetry collection also highlights the poet’s romance with the haiku, a traditional Japanese poem with three lines dealing mostly with nature and the changing seasons. Most of the haiku included in this new anthology were written during the poet’s travels to different parts of Japan. In each haiku, the poet captures natural scenes that embody his inner state at that moment.

Melbourne-based writer Aila M. Lenard compares Alvin B. Cruz’ poetry to “a smooth flowing stream” where “words sail effortlessly, invoking images of nature in its purest beauty. But like the stream we call life, there are often snags and crevices that we fall into. Alvin B. Cruz has wonderfully woven this truth into his effervescent words, opening our eyes to the universal experience of love, loss, and despair. How powerful and poignant these words become when nature is intertwined with life’s realities.” 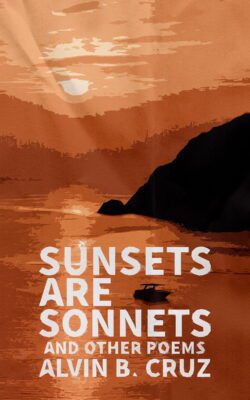 Sunsets are Sonnets by Alvin B. Cruz | Paperback | Poetry
₱350.00
We use cookies to ensure that we give you the best experience on our website. If you continue to use this site we will assume that you are happy with it.AcceptPrivacy Policy